A Yearning For Some Place Else

In Gaelic, the surname Quigley comes from Ó Coigligh, meaning ‘unkempt hair’ – or in some varieties ‘an untidy person’. It originates in County Mayo, where the Quigleys managed to stay long after the Norman Invasion. They were less successful after Cromwell, becoming dispersed. In 1678, there were eleven aboard the merchant ship St. George, which sailed from Waterford to the Americas. A certain Captain John Quigley appeared before the Secretary of Maryland to apply for land warrants for transporting 180 settlers aboard this ship into the province. Those who transported the new settlers, providing the funds for these poor individuals to travel, were given ‘headrights’; at that time, the reward was a right to 50 acres of land per person transported. Those transported paid their debt by indentured service for a number of years, their banker getting the land of course. This colony was first established as a haven for persecuted Catholics and Captain John owned a tavern in St. Mary’s, the first capital and settlement. He had an eye for business opportunities, also being the contractor for the construction of the State Capitol a few years before. My Mother often said there were both high and low Quigleys, and she had the notion we were on the upper slopes. Let us toast all our lost souls.

Lift your glass then: to the Quigley who received a gold medal for painting from the People’s Palace Exhibition in London; to the Quigley who, dissatisfied with work in a Dublin department store, decided to seek a vocation but who never was quite happy with the practice of being given, rather than being allowed to choose, a new religious name upon the taking up of the white veil and the surrendering of her baptismal name; to the Quigley who, as he ascended a ladder to carefully apply a sheet of gold leaf to the cornice of a church interior, complained of a terrible headache and the very next day died of a cerebral aneurysm, a mere 21 years of age; to the Quigley who lived a far longer and contented life than many, but had fate had taken his bicycle on a slight turn one dark night, he may have been just another bloody victim of the Black & Tans; to the Quigley who was always on a pilgrimage to the Opening or Closing of the Holy Door; the Quigley who sweated along the rails across the Nullabor Plain from Kalgoorie; to the Quigley who left her front teeth somewhere in the North of England when stepping off the wrong side of a train in the black-out; to the Quigley who left for New York First Class with all the trimmings and eventually, divested of all his funds and enthusiasm, returned steerage; to the Quigley who went south of the busy Hudson, also penniless, to become a cattle wrangler, who drowned in a raging torrent of a river in Texas; to the Quigley who left his hometown for the docks of Belfast and a merchant ship bound for South Africa, to be sunk somewhere off the Azores.

Indeed, it seems the Quigleys were land bound creatures, not of air or water. Poor swimmers, rovers, hard workers and – after a day of labour – copious drinkers. Give them the hills of Connemara – enough proximity to the sky and the ocean there, or let them tramp through the gorse of the Slieve Bloom mountains, over granite, in rain and the softest heather, or move between wood and bog. Of these other Quigleys all we can say is: fate unknown.

Storytellers, at the beginning of this 21st century, will insist that their tales can begin anywhere, in the middle or at the end, fluctuating randomly through a quantum fuzziness. This tale can begin in the early 1970’s, in a public bar in Dorchester called The Royal Oak, its frontage facing High West Street. Go out the back and through an enclosed courtyard on to Princes Street and within moments you can enter a side door of Dorset County Hospital, behind the kitchens that look like huge portakabins attached to its chiselled Victorian façade. You may find some of kitchen staff finishing their chores, cleaning out steaming metal vats of custard remains. You may glimpse the always smiling Catering Manager, trim, neat, tanned, marshalling his supplies, calculating the minutia of budgets and diets and bulk purchasing with imperturbable calm, overseeing the supply of 521 rashers of bacon as though it were some exquisite form of Zen meditation. “Avoid the company of deluded people when you can. When you cannot, keep your counsel.” The strings of Mantovani can be heard playing in the background – one of the most incongruous of kitchen sounds – emanating from his office, as delicate as the apple pie crumbling. When this particular shift finishes up at 1’o’clock, they will pop across the road to the bar for a quick half pint while they consider how to spend the rest of the day. In this bar you might rub shoulders with Doctors, nurses, porters as well as the kitchen staff. You might find a medical records officer who is also a accomplished ventriloquist and sideshow puppeteer, this year preparing an All Magic Show for the coveted Saturday night slot at the Bowleaze Cove Holiday Camp. In this bar, more likely of an evening, you may also find a friend and colleague of his, Sister of the Private Ward of the Hospital, Monica Quigley, my Aunt and Godmother, sitting on a bar stool with a glass of whiskey mac – her whiskey mixed with Stones ginger wine. Here is a curious gathering, most of whom are connected through her profession ministrations; Jim, a wiry man distinguished by a huge handlebar moustache, a relic of his RAF days; George, a brawny Canadian whose leg was blasted in Normandy, a charming fellow and potential suitor: John, a town councillor and Mayor; Marie, the barmaid, an Irish girl too. Monica seems at home in this pub, secure within its social fortifications and proximity to the wards – which she organises with meticulous attention to detail. In her work she has tended to various Admirals, authors and actors, farmers, publicans and politicians, distant cousins of the Queen, their dearly beloved spouses and offspring, all with the same diligence and dedication, with a concept of service and duty which will be lost to future generations. (This is before authorities consider Best Value or Equal Opportunities or Best Practice in Customer Service.) To be known simply as the Nephew of Sister Quigley opens many doors, from Royal Naval establishments to museum archives, from the gardens of Longleat to the drawing room of Lulworth Castle – though I turned down the opportunity to have a personal tour of the Chemical and Biological Weapons Establishment at Porton Down.

The interior of the pub is warm and smoke filled for there is a fire burning, even in summer. In older days this small room in a pub would have been called a ‘snug’, and here they sit round the fireside, talking and laughing. They’ll talk about the good old days, as we all eventually do after a few drinks, spouting a fog of nonsense. Later, after a rendition of Danny Boy, her favoured song (or perhaps an IRA ballad, for despite our social pretensions we Quigleys are Republicans in our guts), she will raise her glass and perhaps toast the boys in blue jackets, those remembered, those gone. It is more likely, though, that the toast will be “To the First Quigley to set foot in Dear Old Dorset” by which she means herself of course. The Quigleys love a drink and a fine toast and a song or two.

The writer Myles Na Gopaleen (whose other pseudonyms included Count O’Blather, Brother Barnabus and Winnie Wedge) posited the following theory about the Irish love of drink: he believed that they needed a decent dram of whiskey as an antidote to the heat. When working as the navvies of Empire, along the roads and rails of blistering foreign climes, they would consume vast quantities of the stuff to maintain this belief.  In this way the life of the rover was quite attractive when considered in terms of such beneficial inebriation. Streams of whiskey indeed. Others would say we drink to hide our sorrows, to forget that most would spend their lives outside the country of their birth. In 1936, as another wave of Quigleys began to consider their leaving, statistics tell us that of girls aged 10-14 in the 26 counties at this time, 36% would end their lives outside the country. (The corresponding figure for boys was 25%.) Reverend A.A. Lucie, writing in Reports of the Commission on Emigration and Other Population Problems (1948-54) put it this way: ‘The hard core of the problem is the sad stark fact that one Irish child (more than one statistically) in every three is born to emigrate, and grows up with the knowledge that he or she must emigrate. The moral and psychological effect of that fact is immense. It paralyses certain areas. It is a dead weight upon the spirit of the whole country, a dead hand on her economy’.

When a Irish family left their home, displaced by the encroaching English plantations or by hunger and unemployment, bound for foreign lands and an ambiguous future, they took the last embers of their hearth to their nearest neighbours house, so it would continue to burn, a symbol of hope that they may return one day. The Portuguese have a word for it, Saudade, the feeling of longing for something or someone that you love and which is lost. My cousin would say Hiraeth is the Welsh equivalent, or perhaps Ag dúil / Ag tnúth in the Gaelic tongue, a kind of melancholic nostalgia and a constant feeling of absence of the homeland. Slàinte. 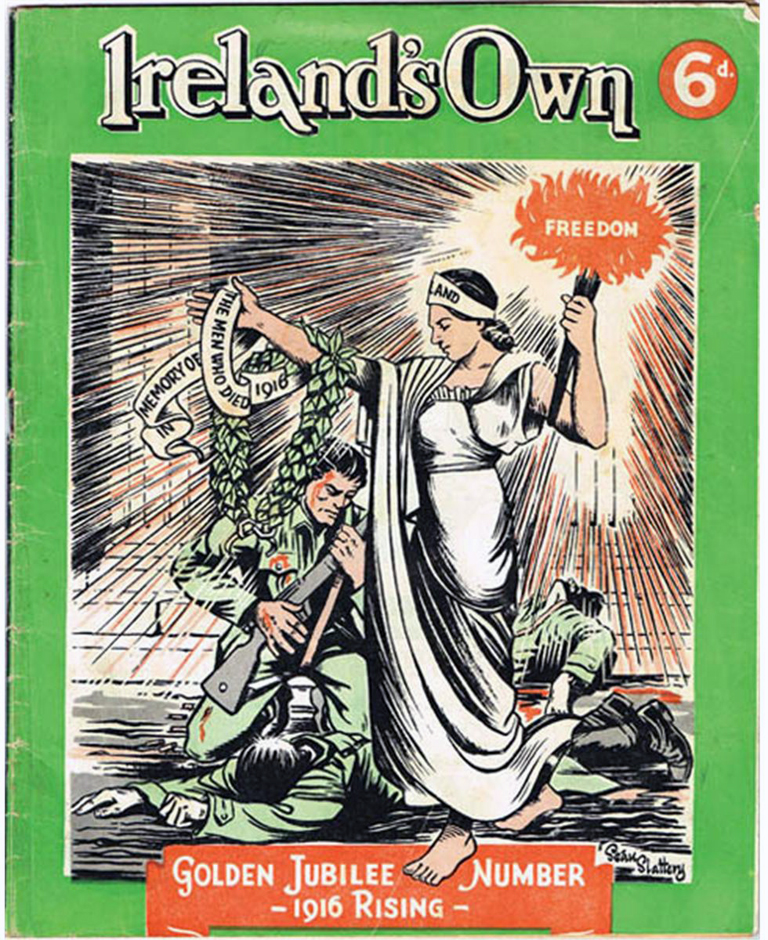