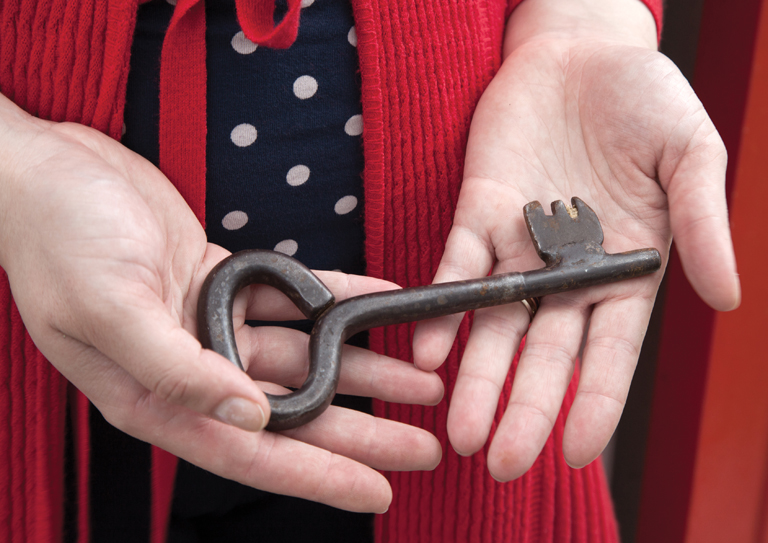 The light flashes twice flashes every 7.5 seconds, first white then red, reaching far out across the sea. The glass is from the Fresnel works in Paris, with concentric rings of ‘stepped’ glass, thick ridges in the lens surface which bend the light slightly more than the one beneath it, so the light rays all emerge in a perfect, parallel beam that travels across the water. The first Fresnel lens was used in 1823 in the Cordouan light at the mouth of the Gironde estuary, which could be seen from more than 32 kilometres.

In the beginning the source of the light was an oil lamp; the lion heads on the exterior of the lantern roof are not merely decorative, they provide ventilation for the smoke. The keeper wears a linen smock so that the rough wool of the uniform will not scratch the optics or lens. Each morning he will clean the interior and exterior of the lantern panes, clean the optic with spirits of wine vinegar. He checks the glazing and caulking against air and water intrusion, ensuring there are no leaks in the roof above. The lantern room must be kept clean and free of accumulations of dirt, insects, birds or their nests. In the evening, the keeper again ascends the 152 steps to the lantern room and checks the wind direction. He adjusts the vents to allow just enough draft into the room, to keep the glass from fogging, and for the fumes from the fire to rise up out of the confined space.

All this is by order of the reformer Tsar Alexander II, who has made the considerable investment in a new light. Made of cast iron, it was constructed in England at Easton & Amos, Southwark, in the great city of London. Southwark was then a centre for iron founding, wire making, glass making, anchor smithing - houses and factories cheek by jowl, seperated only by narrow alleyways. These ironworks were known for producing centrifugal pumps, steam engines, turbines, hydraulic rams, as well as machinery for laying the Atlantic cable. In 1864, the viaduct carrying the railway from London Bridge to Waterloo is under construction, even as the lighthouse plates are being forged and prepared to be transported in parts by steamship to Batumi, thence by horse and cart to Poti. The keeper has little interest in this detail. He is a servant of the Empire, he undertakes his sacred duty, maintaining the light for the protection of mariners, guiding shipping to the safety of the harbour. The light will not fail, no matter the changes of circumstance.