If you look hard enough you will find rivers within the industrial West Midlands, though none of any particular note or size. There’s the River Tame, typically described as an ‘urban river, polluted heavily modified by culverting, straightening, rerouting with concrete banks and few natural features.’ It can be seen running under the M6 at Wednesbury, or under Spaghetti Junction at Gravelly Hill, where it joins with the River Rea, which itself then runs in a culvert south through Cannon Hill Park and the Midlands Arts Centre.

Most water here is artificial, a result of the great canal networks constructed by Brindley, Smeaton and Telford. Between 1768 and 1863 over 180 miles of canal were dug out and 216 locks built to accommodate the rise and fall of the land. By the 1850s there were also 17 pumping stations, 7 tunnels and 6 reservoirs to service the canals. With the Industrial Revolution the area had developed from a small series of hamlets to a concentration of iron foundries, metal working and engineering factories, all utilising the abundant supply of mineral deposits of limestone, coal, ironstone and fireclay. The existing rivers were too small and shallow for most craft to navigate, so the canal network was devised to provide the means of moving goods and materials. The products of this region – coal, iron (and later steel), chemicals, glass-making, brass, guns, bricks and soap, nail and chain making, quarrying, engines and boilers, gas works – all helped provide the manufacturing base for the expansion of Imperial Britain.

At that time, Birmingham alone was said to have more canals than Venice and the town of Tipton, riddled with canals, called ‘cuts’ locally, was known as ‘Little Venice’. Hundreds of boats worked these canals every day, linking mines, furnaces, factories. Despite the coming of the railways, these canals still carried over eight and a half million tons a year at the end of the 19th century.

Running for over a mile, the Netherton Tunnel was the last major canal tunnel to be constructed in Britain. It opened in 1858 to relieve congestion in the very narrow Dudley Tunnel. In 1854, 39,025 boats went through the Dudley Tunnel. At this bottleneck hundreds of boats were delayed for several hours, sometimes days. It had no footpath, so canal horses had to be taken over the top, with local men paid a considerable sum to leg the boat through, which took two to three hours. The tunnel was so confined that only one boat at a time could pass. Boat owners lobbied for a new tunnel and the first sod of earth was turned by Lord Ward on the last day of 1855 and was opened on 20th August 1858. It exceeded its original budget of £238,000, going over by £68,000, mostly due to subsidence during construction. It runs perfectly straight for 1.72 miles, 24 feet high and 27 feet wide. Over 26.5 million bricks were used in the construction. 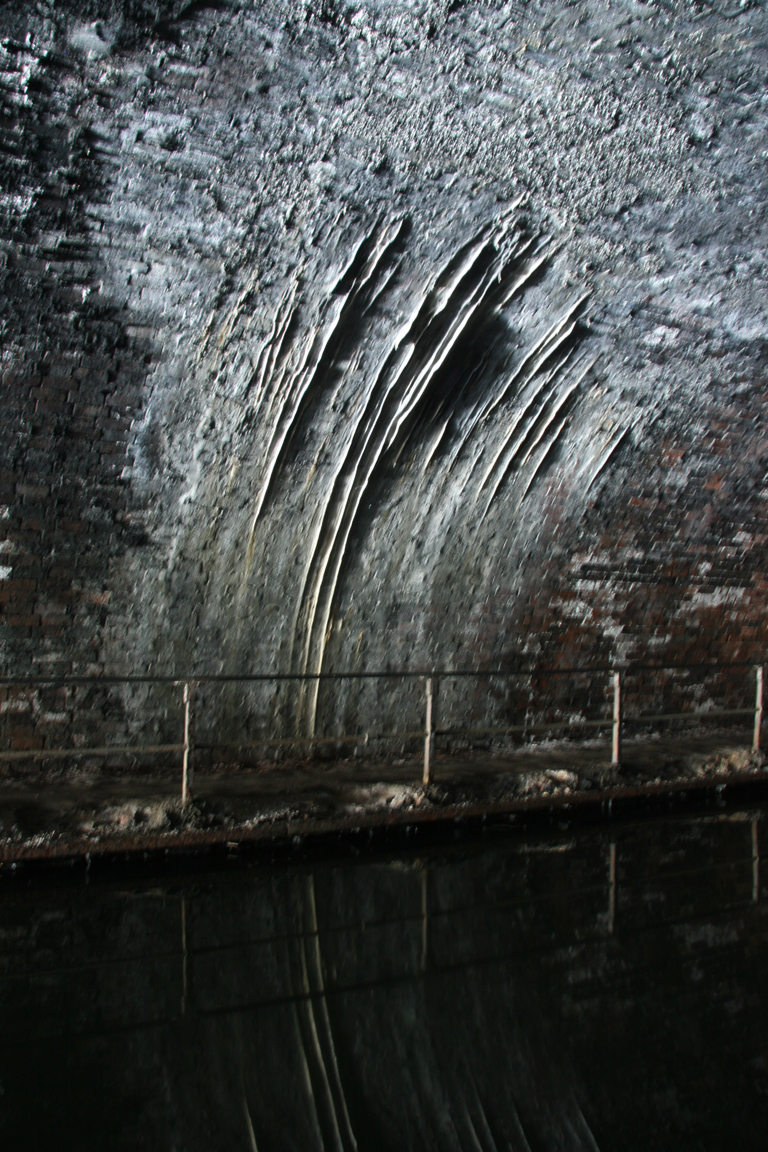 Entrance to canal tunnel. Opened 1858. Brick with sandstone keystone. Round arch has moulded arch band. Flanking walls battered and of concave plan. Parapet has brick coping. The Dudley Canal was amalgamated with the Birmingham Canal Navigations in 1846, and the Netherton Tunnel was subsequently built to improve links between the two systems. It is 3027 yards long and is unusual because of its late date and because of its width: it has two towpaths.  It was lit by gas and later by electricity.

The tunnel runs under the Rowley Hills, from the nature reserve to beneath the post war housing estates and onto Dudley Port on the main Wolverhampton to Birmingham Canal line. One hundred and sixty years ago this area was covered with mineshafts, spoil heaps and coke ovens. These mines often flooded and 1,600,000 litres of water were pumped out of them every day into the canal by Cobb’s Engine House (1831). We entered the tunnel from the southern end, the Dudley side, where you can see the engine house on the hill. It operated until 1928, behind it the spoil heaps of the former Warren’s Hall colliery.

There is no light, apart from that provided by the occasional ventilation tunnels – though it was originally lit by gas, and later electricity. Bring your torch. For a moment, with a shiver, I imagine the months and years of digging by the itinerant Irish navvies, down here in the cold and damp darkness. Once I was 2,600 feet underground at Kellingley Colliery in North Yorkshire and have no wish to linger for long beneath the surface of the earth, as did many of my forebears, though this particular tunnel is a mere 453 feet below the surface. Deep enough for miserable hard labour, digging only with pick and shovel, by candlelight. It was not the largest canal tunnel constructed but is the longest, and is no more than one inch out of line along its entire length. With towpaths on either side, it was also one of the widest.

They began with 17 shaft sites marked on the surface some 160 – 200 feet apart. The workers dug down and when they reached the correct depth they dug out pilot tunnels on either side setting the direction. The shafts were then brick lined and used as air vents; on the surface they are known by the locals as ‘pepper pots’ because of their distinctive shape. Some can be found in people's gardens, one in the centre of a traffic roundabout. The contours of the landscape we see today on the surface were formed to a great extent by the excavations carried out during its construction, the hillocks made from the original soil brought up from the diggings underground and dumped here.

During the works underground eighteen men were seriously injured. Nine others died, five hit by skips falling down the shaft. One man fell down Shaft 11, one drowned in the sump water of Shaft 7, two were hit by falling rocks during tunnelling. These were considered minor mishaps. The main engineer on the project, James Ralph Walker, was congratulated by the Institute of Engineers on the project’s standard of safety.

In 2013, repairs were undertaken to a section of the tunnel by the Canal & River Trust. Over four months, at a cost of £1.5 million, holes were drilled into the walls, filled with steel tubes, which were filled with concrete and a new reinforced arch was attached to the wall to create a stable centre section. There were no fatalities.