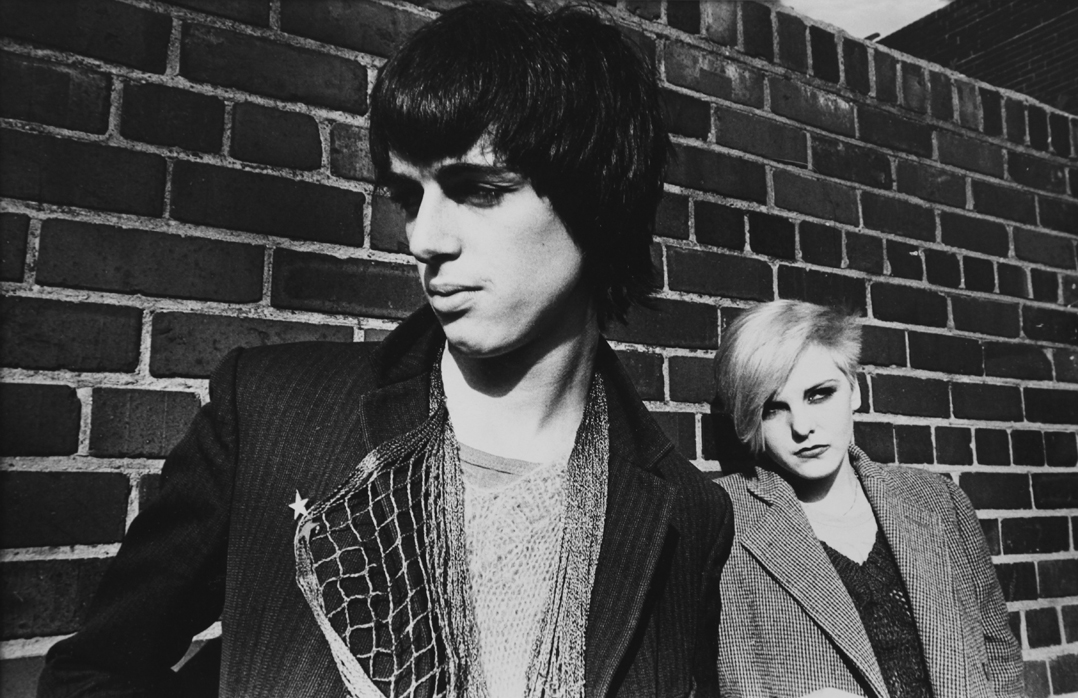 My favourite shot, from that time…

Bright brittle sunshine early afternoon, Cheapside, Digbeth, early 1980. A rare thing in Brum, the sunshine. A photograph that didn’t make the final cut for an exhibition that was first shown at The Photographic Gallery, Southampton.  ‘Going Through the Motions’ was my documentation of the post-punk scene in (mostly) Brum, the title lifted from a Prefects song recorded in BBC Maida Vale studios for airing on the John Peel Show in January 1979. These images, when seen in the genteel southern counties, caused some controversy. They attracted a huge number of (often irate) comments in the Gallery Comments Book, my favourite being ‘What sad lives young people lead these days.’ (I wonder what would they make of the TikTok/Snapchat/Discord generation?)

Stephen Duffy and his friend Jill (if I recall correctly), were on their way up to the town centre, up past the concrete flower, food and rag markets, usually to hang out in the cafe at Rackhams department store, an institution in the town since 1881. (You had to go through the lingerie department to get to the cafe.) It was the poshest and biggest store in town; it even had a phone booth lined with polished wood, something we had only seen in vintage black & white films set in places like New York. (Stephen was inspired at that time to write a song about Rackhams.)

He had not long quit as the (original) singer of Duran Duran, leaving his mates Nick Rhodes and Nigel Taylor to soon go on to pop supremacy. He was now singing with The Subterranean Hawks, (AKA The Hawks). ‘An androgynous young Stan Laurel in cast-off Crimplene and Beatle-boots,’ was how the drummer Dave Twist later described him. A decade later Stephen went on to make some fine work as The Lilac Time (‘burnished folk’ as the Guardian newspaper has it), and finally made some money by co-writing some songs for Barenaked Ladies in 1998, and in the 2000s by working with that popular song and dance man Robbie Williams.

Duffy reunited with Rhodes to make ‘Dark Circles’ (as The Devils), an album released in 2002, using original material from the 78/79 period found on an old tape (his songs from the fledging Duran Duran), then recorded using vintage analogue instruments to recreate their sound as it was originally intended - including a song about the local nightclub Barbarellas, that haunt of haunted punky youth.

‘Full of hope at Barbarellas

We named our first group after Barbarellas

Got to play on stage at Barbarellas

Car park now instead of Barbarellas’

Barbarellas was one of many clubs owned in the city by the Fewtrell family.

Rackhams Department Store: behind here you would once find the red light district, giving rise to the euphemistic expression ‘to go round the back of Rackhams’, used in Brum and across the Black Country to infer involvement in prostitution.