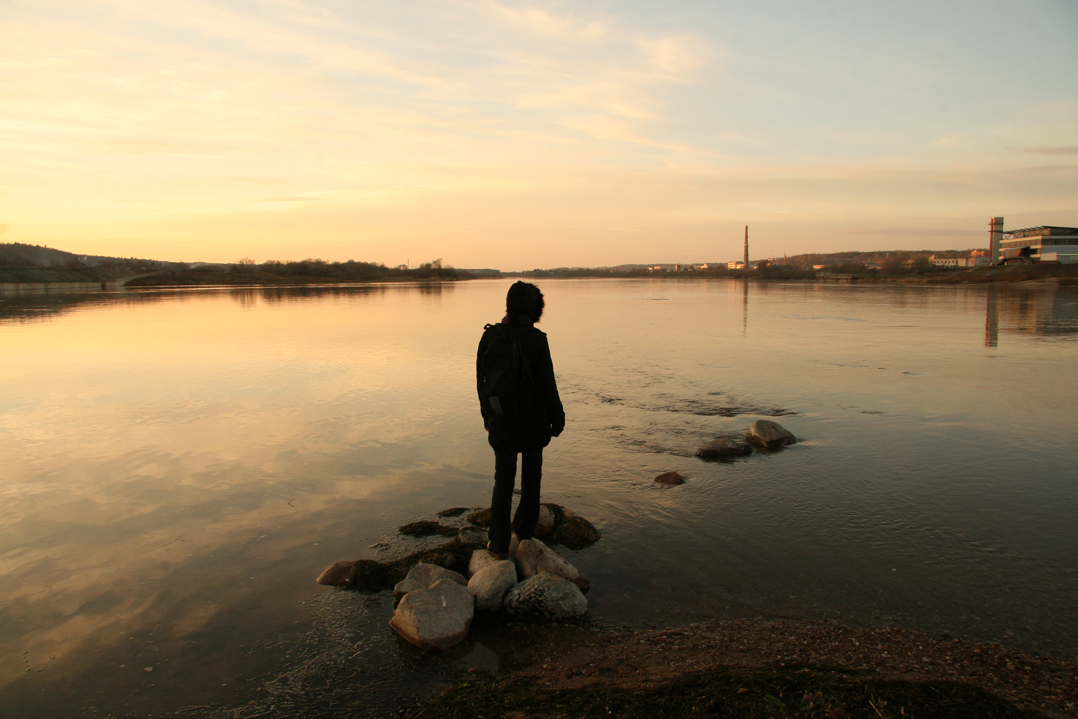 Low banks of scrub on the left bank, on the right bank a modern banqueting hall Combo and beyond that the docks. Behind us the oldest stone castle in Lithuania, sited here at the junction of the Nemunas and Neris rivers. First destroyed by Crusaders in 1362, it was rebuilt and was later used by Swedish and Russian troops. Today the tower houses a tourist information centre.

The Nemunas rises in Belarus and flows 900 kilometres through Lithuania into the Curionian lagoon and then enters the Baltic Sea. Here they call it the father of rivers. The Neris also comes from Belarus, spending more than half its time there, before flowing through Vilnius and onto Kaunas.

The day is cold and the light fading. She was a little impressed I had heard of Vader, indeed that I had experienced their sonic assault in a basement club in Birmingham. She was far more impressed by the inhabitants of Žmuidzinavičius Museum, commonly known as the Devil's Museum. It contains three floors of over a thousand horned creatures from around the world in different shape, size and colour. They say the displays are always changing, as do not devils have the power to shape-shift? Here she finds Ravana, from Hindu mythology, the 10 headed King of the Rakshasas, horribly persistent enemy of Rama. Some Rakshasas are blood-drinking demons, with two sharp fangs not unlike the vampires portrayed in our later Western mythology. She resolves to visit India one day. (Indeed, she will, deporting herself as a graceful dancer.)

Earlier we stood on Aleksotas bridge, which used to be called the longest bridge in the world; in the early 19th century it took thirteen days to cross. The left bank was then the Kingdom of Poland which used the Gregorian calendar; the right bank lay in the Russian Empire, which still used the Julian calendar, thus running 13 days behind the other. Here men line up each morning, along the old town shore near the bridge, to fish and gossip. Some say they come here looking for a girlfriend, but there are few women fisherfolk about today, nor do mermaids break the surface of the fast flowing river.

Napoleon and his Grande Armée of 690,000 troops crossed the river here in June 1812, en route to Moscow. He set up a tent on the high ground to watch them all pass. The remnants of this army retreated back through here in December, Napoleon having left them already to travel to Paris by sleigh. The last report of Marshal Berthier read: ‘I have to report to Your Imperial Highness, that there is no more any discipline left in the regular army, or in the Guard units, which at this moment consist of 400, perhaps 500 men.  Generals and other officers have lost everything they had: many of them have frozen limbs.  Many corpses litter the roadways, and houses are full of dying men. At this moment the Army consists of a column only a few leagues long.  Receiving no orders, this column starts walking in the morning and stops at night.  The Marshals are walking on foot along with all other commoners. The Army has ceased to exist.’

This area was to be transformed by massive constructions ordered by the Tsar, with eight forts and gun emplacements built to ring the city. By the end of the 19th century, nearly a third of the inhabitants were professional soldiers on garrison duty. The Ninth Fort, built in 1902, was later used by the Soviet NKVD for prisoners en route to the Gulag, then became a site of mass murder under the Nazis. Today it is preserved as a museum of genocide and the Holocaust.

Here, at this confluence, the past flows by us, just within reach.