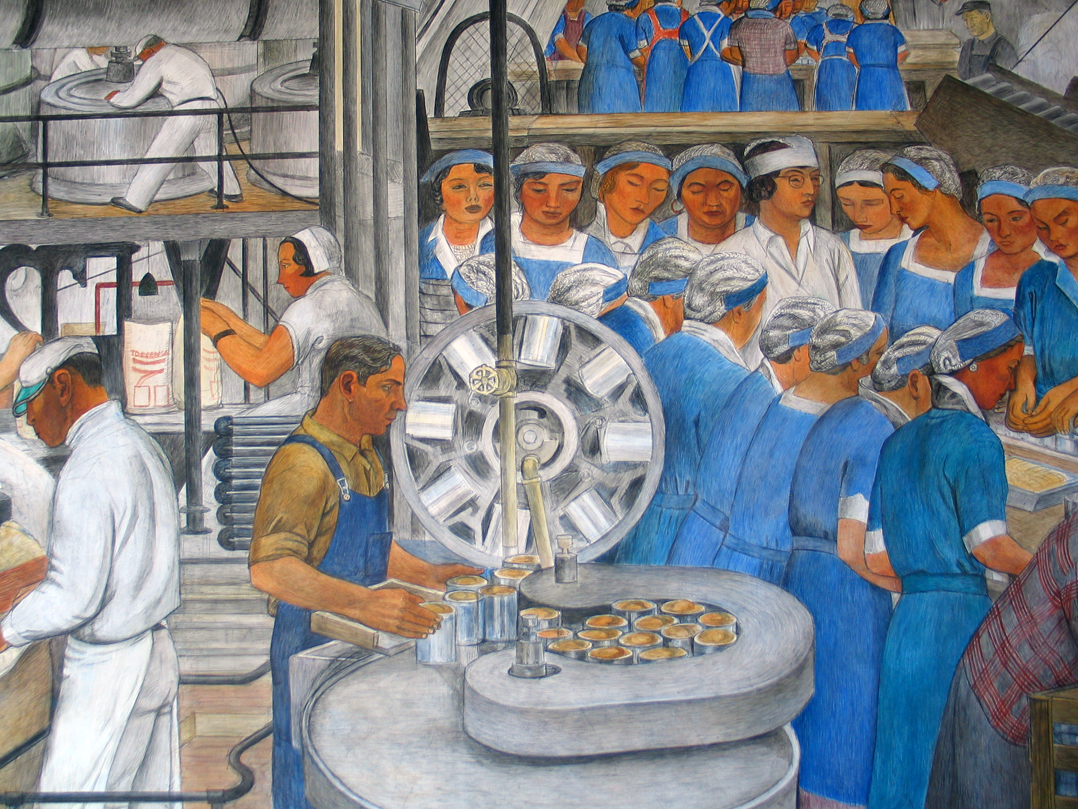 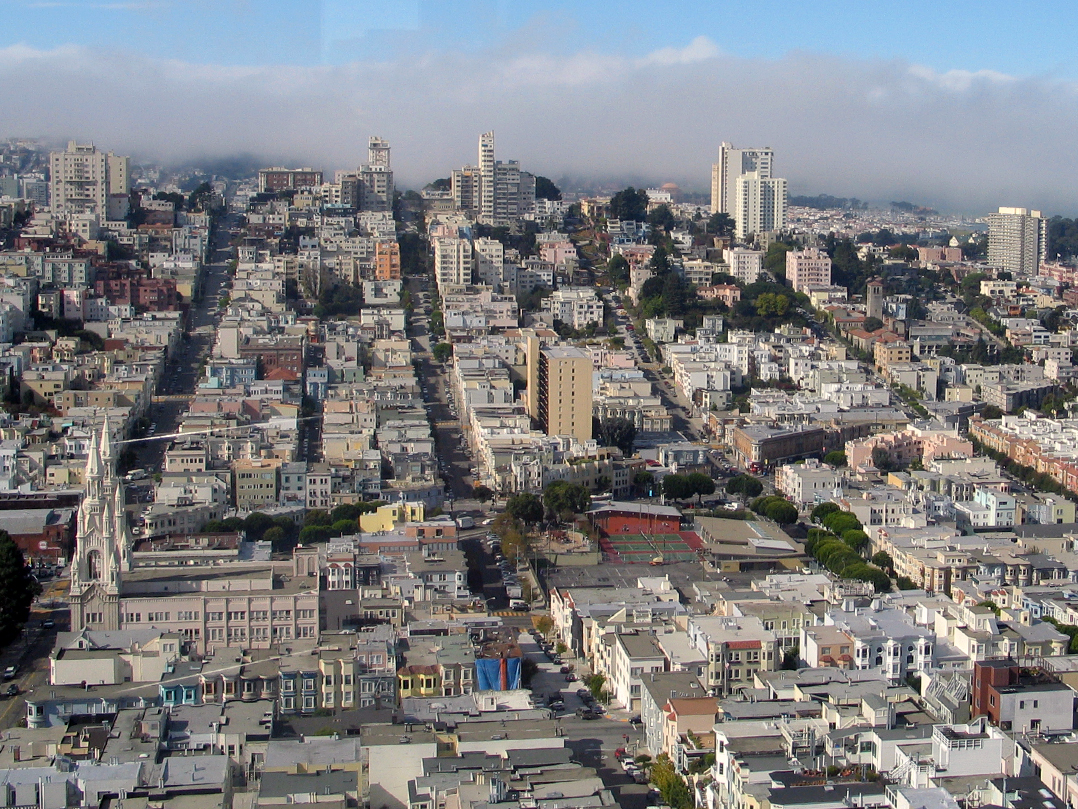 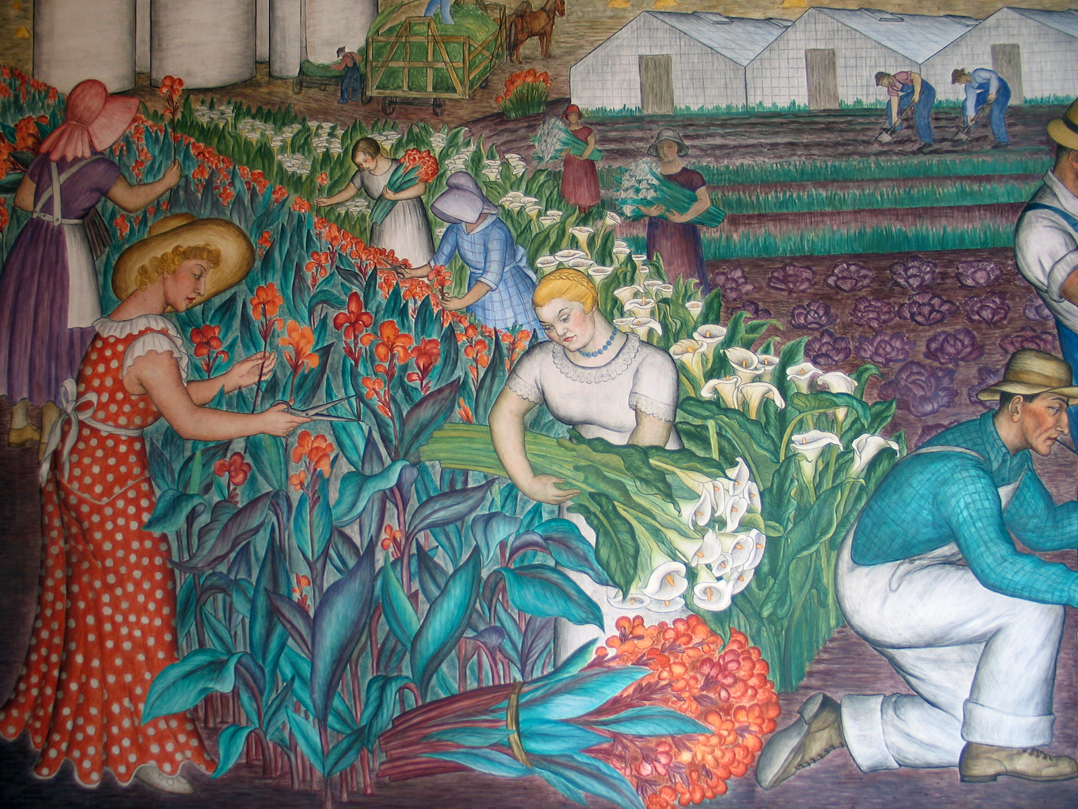 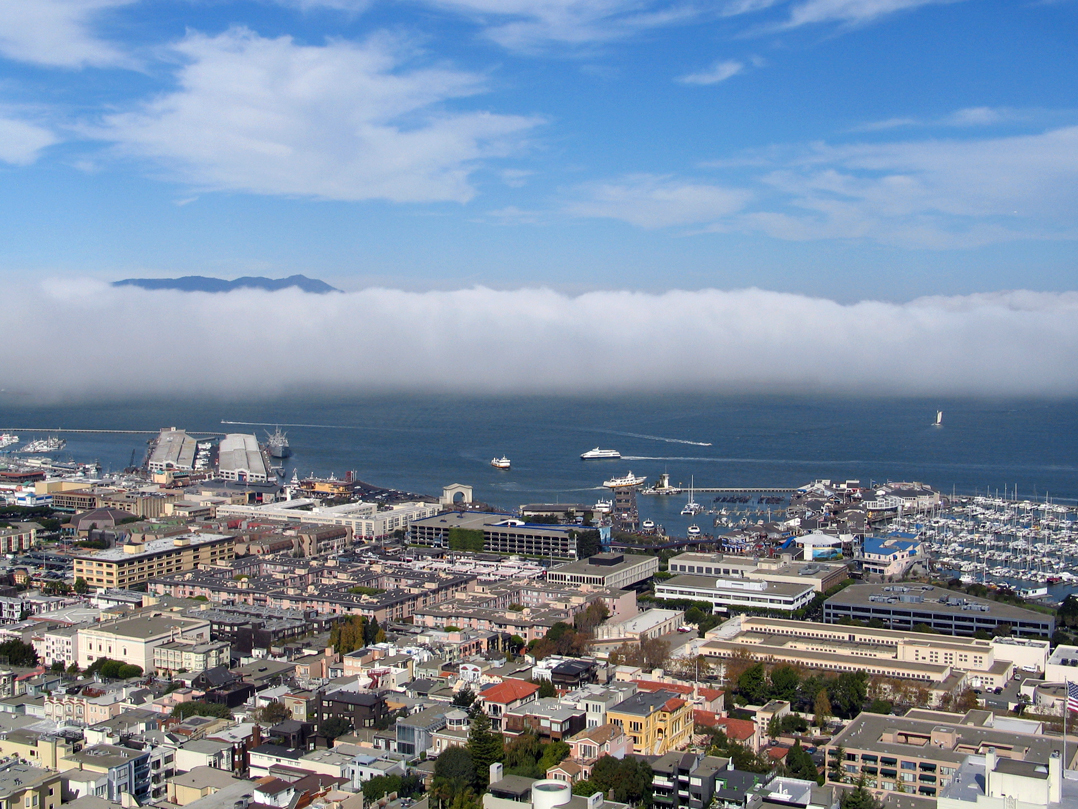 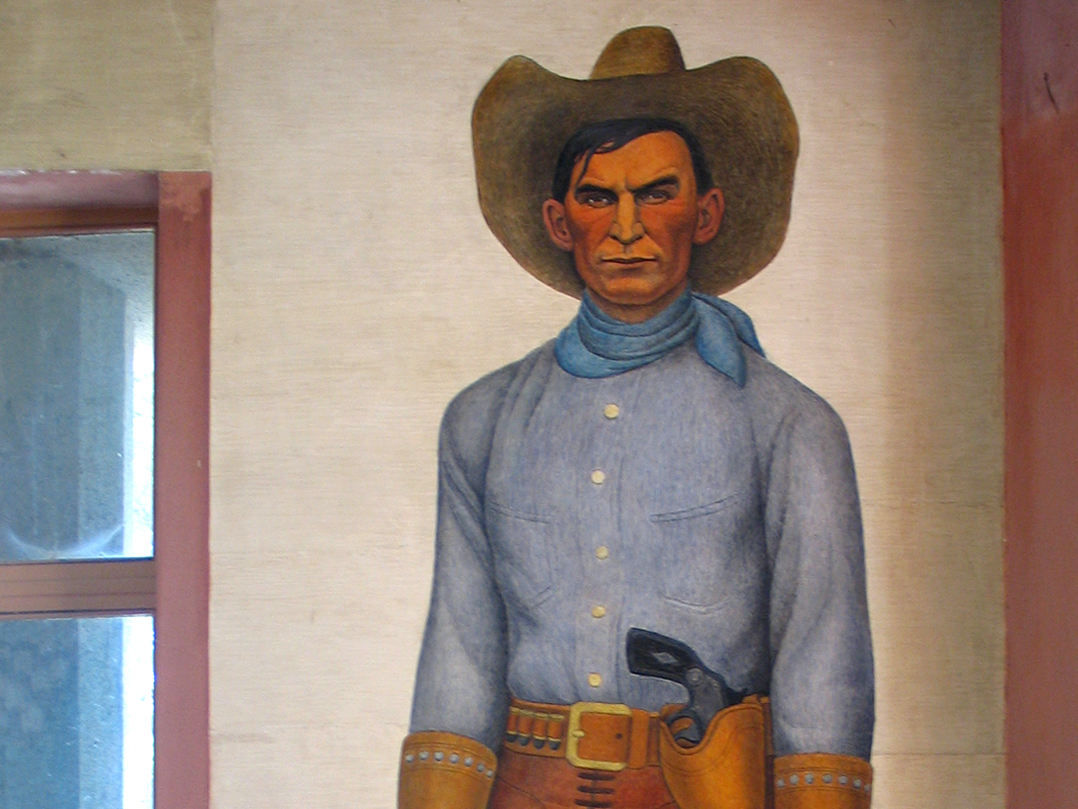 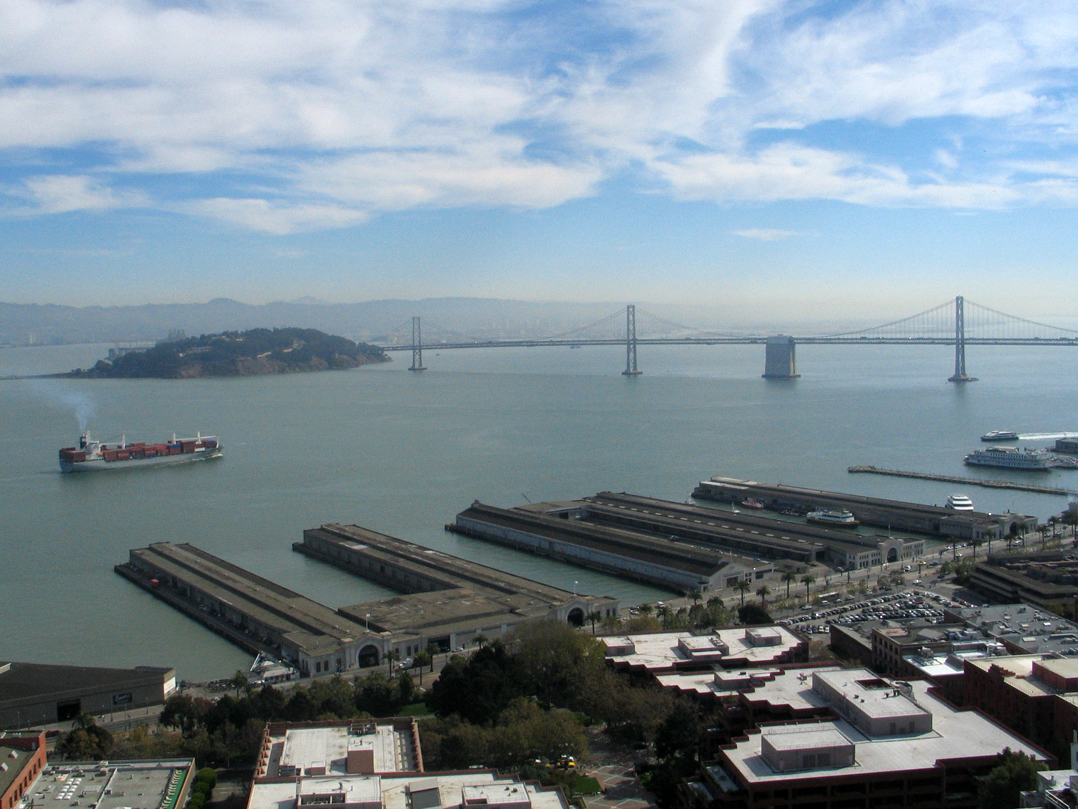 In ‘Vertigo’ (1958) the interior of the San Francisco apartment of the retired detective, played by James Stewart, was filmed on a studio set. Hitchcock insisted that Coit tower appeared prominently in the background, viewed through the apartment window, though in reality it wasn’t visible from the actual building on Lombard Street where the action unfolded. Hitchcock simply explained to his Art Director that it was a phallic symbol. For him, it was perhaps not unlike those columns of Trajan in Rome, of Nelson in London, or the Qutb Minar in Delhi. Standing proud atop Telegraph Hill, it was popularly thought to represent a firehose nozzle, as it was built as a memorial to volunteer fireman. Its full name is the Lillian Coit Memorial Tower, made with funds bequeathed by Lily Hitchcock Coit (1843 -1929), who left a third of her fortune with the instruction to beautify the city. Having helped as a teenager with a fire and then adopted as a mascot of Knickerbocker Engine Co. No. 5, she was nicknamed ‘Firebelle Lil’ and went on to become became a patroness of the local volunteer firefighters.

Selected from an architectural competition, the tower was designed by Arthur Brown Jr, and Henry Howard. Constructed of unpainted concrete, inside there are 3,691 square feet of murals tell the story of the state of California during those Depression years. Mostly done in fresco, they were painted in a six month period in 1934 by a group of artists employed by the Public Works of Art Project, a New Deal federal employment programme for artists. They are quite remarkable but soon caused controversy. With a bitter longshoremen’s strike underway and the port closed, some members of the San Francisco Art Commission objected to what was described as ‘Communist symbols’ in some of the frescoes. The tower was padlocked and the windows whitewashed. The Chronicle used the headline: ‘Is This Red Propaganda? Murals on Coit Shaft Hint Plot for Red Cause.’ (Some of the artists were fans of Diego Rivera, who had visited the Bay Area a number of times, and whose mural the previous years the Rockefeller Centre in New York had been plastered over before completion when the artist refused to remove an image of Lenin.) The Artists’ and Writers’ Union picketed to protect the Coit murals from being destroyed. While some of the political symbols were allowed to remain - Bernard Zakheim's library scene showing a man pulling a copy of Karl Marx's Das Capital off a bookshelf can still be seen - the hammer and sickle included in Clifford Wight's work was chipped off the wall and an image of the radical newspaper ‘Western Worker’ in John Langley Howard’s mural painted over.

Some local residents remained displeased. Two men were soon sent to prison for defacing the murals and Mrs Honore Gledhill, the daughter of British nobility, took pot shots with a .22 calibre revolver at the tower from her place of business, the Dead Fish Café. When arrested and charged, she protested that the tower ‘invaded the sanctity of her Telegraph Hill Bohemia.’ She was given a 30-day suspended sentence.

In the 1850s, at this summit you would find the site of a semaphore telegraph, alerting residents to the arrival of ships. Pioneer Park, which surrounds the tower, was established in 1876. A German-style castle-observatory was then constructed on the site, offering beer and telescope views. It proved unsuccessful, despite staging gladiator fights with men in full armour. The castle burned down in 1903. Soon after, the California Club, the North Beach Improvement Club, and the California Outdoor Art League lobbied for the preservation of the hill. A road to the summit was built in 1923, and in 1933 the memorial tower was built offering panoramic views of the city.

Look down over North Beach, where the Beats once roamed, where The Dharma Committee, an ad hoc group of writers and poets, met at the Bread and Wine Mission for the free spaghetti dinners and poetry readings. Among them, Richard Brautigan, who lived nearby, some years before he would write ‘Trout Fishing in America’ or his fan letter to Ringo Starr. Over there lies Alcatraz Island and beyond, Marin County and the houseboats and yachts of Sausalito. To the east, alongside liberal Berkeley, the Oakland Hills and one of the busiest ports in the Americas. Watch the fog banks roll in from the Pacific (which has caused much water damage to the tower over the years), over the undulating streets of Sunset and note that this is now the most expensive city in the U.S. to live in, fuelled by the influx of Silicon Valley workers, displacing long-term residents. People justly ask, why can’t these clever tech companies solve the city’s problems? It’s quiet on Mission, even the Hallowe’en craziness of the Castro subdued. Tower Records long gone, consigned to the past like the Temperance fountain once to be found at the foot of the statue of Benjamin Franklin. An inscription reads: TO OUR/ BOYS and GIRLS/ WHO WILL SOON/ TAKE OUR PLACES/ AND PASS ON. We listen to Spotify now and drink water from plastic bottles, though I glimpse the ghost of Donald Sutherland, still running up the Filbert Street steps in the 1978 film ‘Invasion of the Body Snatchers’, Kevin McCarthy still shouting ‘They’re here! They’re here!’

In the 1959 film ‘On the Beach’, which depicts the aftermath of a nuclear war, a grim-faced Gregory Peck looks through the periscope as his submarine USS Sawfish enters the Bay of San Francisco. He sees only empty docks and wharves, deserted streets. Surprisingly, Coit Tower is not on view. In real life, the USS submarine Catfish photographed the tower through the crosshairs of its periscope in January 1951, an image that offers a sinister kind of Cold War warning. Coit Tower was then still a dominant feature of the landscape, the Transamerica Pyramid yet to rise up, the gardens of the tower used that same year as city backdrops in the noir film ‘The House on Telegraph Hill’. In 2015, Dwayne Johnson spends a reflective moment in the disaster movie ‘San Andreas’, where he stares at a photograph of himself and his family, who are pictured posing happily in front of the tower, an offering of motivation for his rescue mission as the city is completely obliterated, one of 20 attempts of destruction in the movies.

Somewhere around here, at the time Hitchcock was doing the location shots for ‘Vertigo’, Brautigan scribbled on a piece of paper:

‘Baudelaire opened
up a hamburger stand
in San Fransisco,
but he put flowers
between the buns.
People would come in
and say, 'Give me a
hamburger with plenty
of onions on it.'
Baudelaire would give
them a flowerburger
instead and the people
would say, 'What kind
of a hamburger stand
is this?

Maybe even at the foot of Lillian Coit Memorial Tower, where he liked to sit and try to describe the fog?