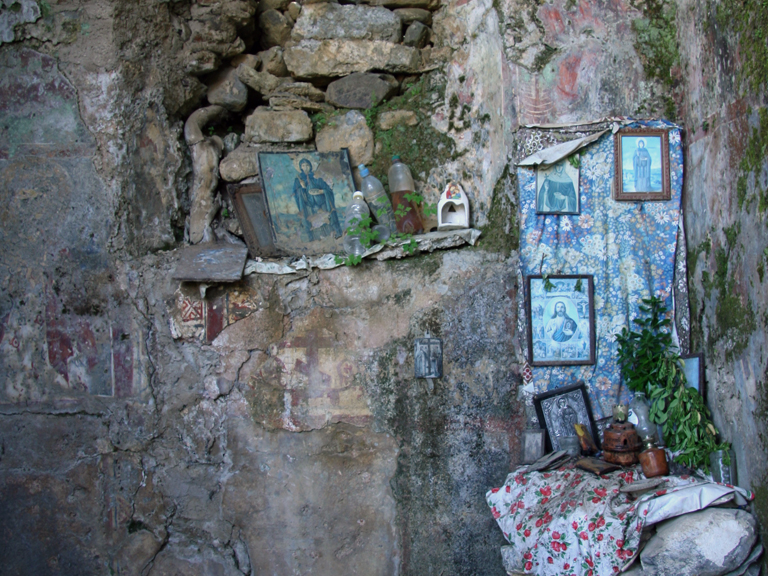 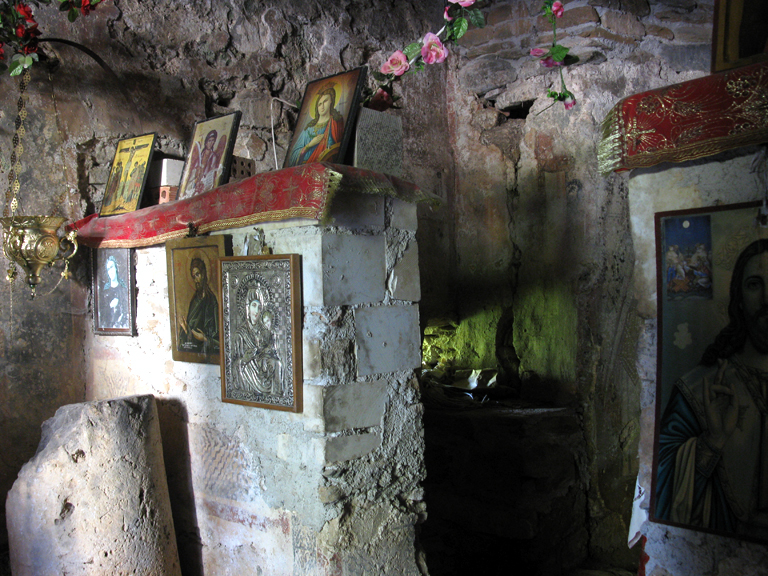 Up into the mountains after the opening of the exhibition in Chania, invited there by some of our workshop participants, a group of lively young people and their teachers, who guide us round their village, Kandanos, and tell us their stories. We worked with them for two weeks, based at the restored Etz Hayyim Synagogue, the only surviving remnant of the once Romaniote Jewish community on island, unpeeling the layers of hidden history of this ancient port.

From the cool green and white interiors of their school, where they treat us to local delicacies and share details their school curriculum (along with a vigorous demonstration of local folk dances in the gym), they then take us through the backstreets. Our first stop is the war memorial which recalls the destruction of 3rd June 1941. Here we see the replicas of the two originals plaques which were once placed at each entrance to the village. The inscriptions, in German and Greek, tell us: ‘Here stood Kandanos, destroyed in retribution for the murder of 25 German soldiers, never to be rebuilt again.’

The village was razed to the ground by the German troops, who killed all 180 inhabitants and their animals. Nearby villages, Floria and Kakopetro, met the same fate. Kandanos was declared a ‘dead zone’ and Cretans forbidden to return to the village or rebuild it. After the war, the village was rebuilt, several of the Byzantine churches and their frescoes restored. In 1963 Germany donated new waterworks to the village. Today Kandonos numbers less than 500 inhabitants. The original plaques can be found in the museum.

We pass by fruits, vegetable, bread shops and tavernas, visit a restored traditional family house, and then go out across the parched fields, through woodland and meadow, trying to name the wildflowers - yellowwort, hypericum, rock roses - and we come to a ruined chapel, then a small chapel on the outskirts, Ayia Aikaterini, where we light candles and reflect on the vicissitudes of history. We discover that the Luftwaffe general who ordered the killings here was Kurt Student; in 1946, he was tried by a military tribunal in Luneberg on charges of mistreatment and murder of prisoners of war by his forces in Crete (though not for the murder of civilians). Found guilty of three out of eight charges, he was sentenced to five years in prison, but released in 1948 on a medical discharge. Greece wanted to extradite him, but their request was turned down. He got to live on until 1978.

Memories of the Second World War that are never far away on this island. Under almost every rock there is a story. In a tavern, some old guys fondly recall the Englishman Patrick Leigh Fermor, known to me as a travel writer who at the age of 18 set off in 1933 to walked from the Hook of Holland to Constantinople but known to them as Michalis, working with George Doundoulakis and the Cretan resistance, who fought so doggedly against the Nazi occupation. Just beneath the surface, are deeper memories of a multi-faceted history reaching back to the time of Alexander the Great, the character of the island shaped in relative isolation from the Greek mainland, and its proximity to North Africa, Egypt, and the Levantine coast, its traders and travellers. In Chania alone - called the‘diamond of Crete’- you will find Venetian fortifications, Ottoman-era mosques, or the synagogue restored almost single-handedly by another remarkable man, Niko Stavroulakis.

It’s early in the evening when we reach the peninsula of Palaiochora on the southern coast, where it’s blustery and a cold wind whips in off the Libyan Sea. Before we head back, there’s just time to try the dessert of bergamot orange in sweet syrup, with Greek yogurt and raki. A delicious finale.